A Fly Spray That Actually WORKS! 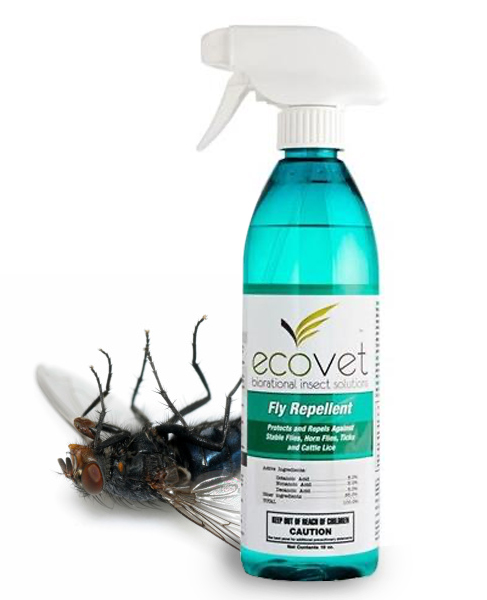 After having tried just about every commercial fly spray on the market, from the hard-core to the herbal, and having also tried various homemade concoctions made from essential oils, Avon Skin-So-Soft, and so on, I was just about ready to tear my hair out in frustration, as none of them seemed to do much of anything.

Then along came Kodachrome, my gorgeous, 4-year-old Paint/Friesian cross, who turned out to have sweet itch and was literally tearing his hair out! Being me, I delved into research, looking for any information I could find about diet, fly sheets, and anything else that might help me prevent my poor, sweet boy from rubbing himself raw this coming fly season.

I had little hope that there could be an as-yet-untried fly spray out there that would do anything to protect him from the nasty little gnats that plagued him so horribly, but then I stumbled across a product called Ecovet. According to their website, the benefits of Ecovet are that it is:

“Hmm,” I thought,  “That sounds amazing…but I’ve been told before that something really works, only to find that it really didn’t.” Nonetheless, I got my hands on some and decided to give it a try. I had been warned that it has a “very different” smell that a lot of people find less-than-pleasant, so I was thinking the product must smell pretty rank. I’m not sure exactly what I was expecting — maybe  something between a pissed-off skunk and a week-old bucket of squid — but I was pleasantly surprised that it really isn’t bad at all. While it does smell a bit odd (I’d say a little medicinal with an undertone of burnt rubber), I had tried fly sprays before that had such a strong, cheap perfume type smell that I just couldn’t stand them, nor could my highly odor-sensitive mustang, Hummer. I was therefore especially pleased that even Hummer allowed himself to be sprayed with the Ecovet with no particular concern.

Once we had the product on (I only used it very sparingly, as I was told you don’t have to use much), the question remained: Would it work, and if so, for how long? Having used fly sprays that claim to be protective “for up to 14 days”, only to find that after a few hours, the flies were landing and biting again, I had serious doubts. But, I am truly thrilled to report that THIS ECOVET SPRAY ACTUALLY WORKS! Even after three days, I’ve seen some species of flies hover around the horses, catch a hint of the Ecovet, and fly away, though some other types would land. I think I will be applying it every other day. Keep in mind, though, that I really didn’t put much on the horses, so if you did apply it somewhat more heavily, you might truly get that third day. [See update below.]

I also spoke to my dear friend and horse person extraordinaire, Christina Cline, about “my new find”, and it turns out she has been using Ecovet for years. Christina is a professional hoof trimmer, and she told me that Ecovet is the only fly spray she keeps in her truck to use on clients’ horses if the client doesn’t have any spray. As she explained, “It’s a real pain to try to trim a horse that is being tortured by flies, and Ecovet is the only spray that once you put it on, the flies won’t even land, let alone bite. That stuff ROCKS!”

We have yet to get into the heavy part of the fly season here, but so far, I am seeing quiet tails, and no head shaking, leg stomping, or ear twitching, all of which I was already witnessing prior to starting with the Ecovet. I will update this post at a later date to tell you all whether Ecovet has protected Kodachrome from the horror gnats of sweet itch hell, but I am hopeful!

One last note: The smell of the Ecovet really does stay with you, so I use gloves and a smock when I apply it to keep it off my hands and clothes. While it isn’t a terrible smell, it is not exactly a bouquet of roses! I also generally squirt the product onto a small cotton pad (like the ones you get to remove makeup) and wipe it on key areas of the horse, rather than spray it all over. I find that this makes the bottle last longer and keeps it off of me better!

UPDATE: It is now late August, well into the heaviest and hottest part of fly season. My experience with Ecovet for the past few months has been less stellar. Perhaps it is the hotter temperatures, but I find that if I really want to protect Koda from getting itchy, I definitely have to spray him quite thoroughly at least once a day, and sometimes twice. Having done the same thing previously with other sprays — and even then he got bitten and itchy — I would still say that Ecovet works better than other sprays I have used, but I am having to apply it a lot more frequently than I had hoped. With the other horses, once a day is enough, but not if you have one like Koda with insect bite sensitivities.