“To Soak or Not to Soak”: The Truth Behind Treating Hoof Abscesses 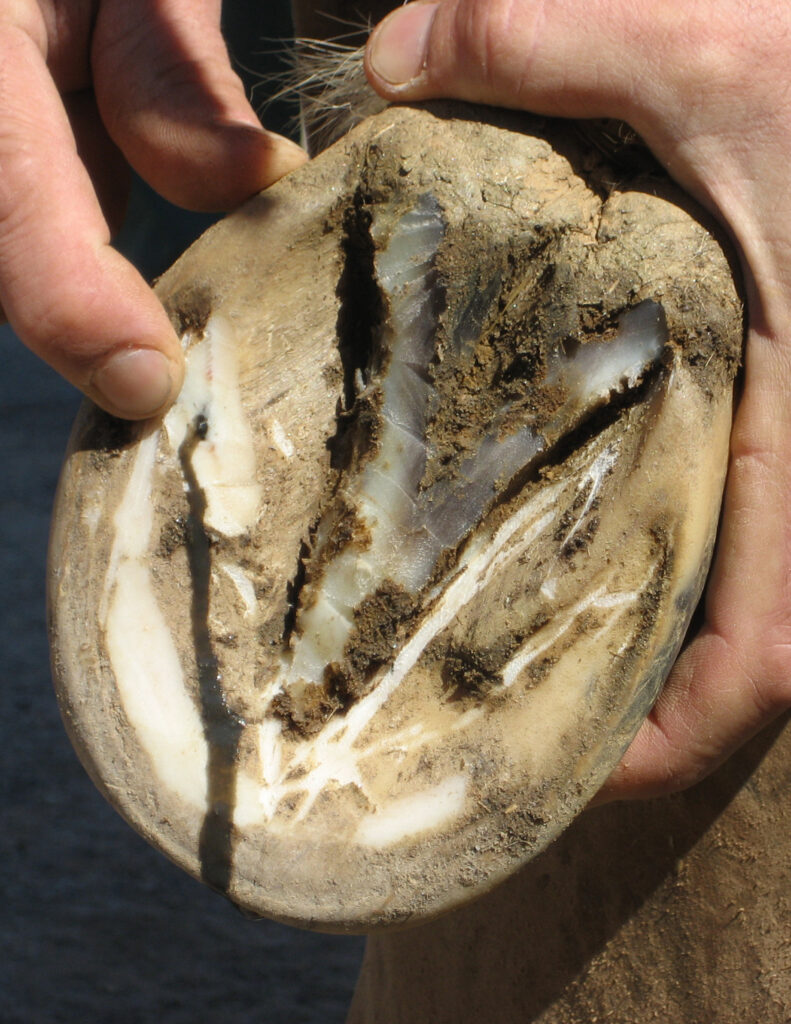 There are common practices in the treatment of hoof abscesses that may not actually be beneficial for your horse.

Abscesses, though usually not serious, can be incredibly painful for the horse and scary for the owner, who may have no idea why their horse has suddenly gone dead lame. Once they have determined that the problem is an abscess, many horse owners believe they know what to do, but the old “tried and true” methods — particularly soaking — may not actually be beneficial and could potentially make the situation worse. Here are some thoughts on treating abscesses from “The Essential Hoof Book”:

Treatment of an abscess is initially aimed at getting it to drain, which is usually fairly easy for a vet to accomplish if they have located the spot where the abscess got started. If the tract is in the white line, the vet can open it using a tool such as a thin, narrow loop knife, or a surgical bone curette. Once the tool gets up into the pocket of the abscess, drainage will start and the horse usually feels quite a bit better right away. If the opening is in the sole, your vet or hoof care professional will pare out a small hole to allow the abscess to drain. It is not necessary to make a large hole, as the continual pressure and release of the horse walking on the foot will help to expel the exudate. Keeping the hole as small as possible is the best way to preserve sole integrity and minimize the chance of further damage. Flushing of the wound, a process known as lavage, can help remove pus and speed heeling in some cases, but where damage is more extensive, surgery may be required to remove infected or necrotic tissue.

Once drainage is established, it is important to keep the opening clean, so wrapping the foot in a medicated poultice is recommended. There are commercially available poultice products such as Animalintex® , which is moistened in hot water, applied, and then left on for approximately 48 hours. Poultices can also be made at home out of cotton bandage materials saturated with a “drawing agent” such as a combination of Epsom salts and Betadine ®. Any poultice will need to be covered and held in place with a bandage.

As for soaking of the foot, this time-honored practice has fallen out of favor with many hoof experts. The traditional soak of warm water and Epsom salts was supposed to be done for at least 15 minutes, 2-3 times a day, for as many days as it took for the abscess to rupture. The purpose of the Epsom soaks was to soften the hoof and “draw out” the abscess, which would supposedly allow the abscess to mature and break out faster. Unfortunately, there is no evidence that abscesses resolve any faster than they would have otherwise as a result of soaking, and in fact, some equine podiatry experts say it can actually slow the healing process and prolong the horse’s pain. What happens is that horn material expands as it absorbs water, which can choke off the draining tract of an abscess, trapping the exudate inside the abscess. As an abscess needs to drain and dry out to heal, anything that keeps it wet and prevents drainage would be detrimental. In addition, repeated soaking is known to be damaging to both hoof and sole horn, and may cause widening of the white line, allowing more harmful organisms to invade the sole-wall juncture. 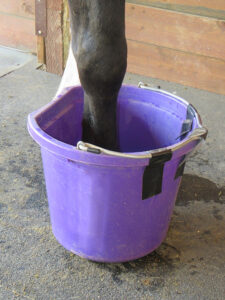 Soaking is no longer considered beneficial by many hoof experts, and it may even be harmful.

Critics of repeated soaking only recommend it as a short-term application to soften a very hard foot in order to make it possible to pare the sole or frog to create a drainage channel. They also emphasize that the fastest way to relieve the often excruciating pain caused by an abscess is to open it up and drain it, which can usually be accomplished very quickly by a skilled veterinarian or hoof care professional. Leaving the horse in pain for days and doing nothing but soaking the foot is, in their opinion, allowing unnecessary suffering. Finally, they argue that abscesses not drained therapeutically are more likely to migrate up under the hoof wall and exit at the coronary band, which can potentially cause a permanent disorganization of the horn tubules that grow from that area. While most abscesses that pop out at the coronet don’t cause a permanent problem, it does happen and can leave the horse with a weakened hoof wall more vulnerable to cracking or splitting in the future. Even worse, a migrating abscess can move deep into the foot where it may damage the internal structures, possibly leading to permanent lameness.

Of course, there will always be people telling you that they soaked their horse’s foot and the abscess popped out the very same day without issues, but as they have no way of knowing whether or not the abscess would have ruptured that day on its own, they cannot say that the maturing of the abscess was the result of the soaking.

Every horse owner has to decide who to listen to when it comes to treating their horse’s ailments, but it is always wise to at least consider the science – or lack thereof – before choosing a course of action. One adjunct to treatment that almost everyone agrees on is giving a horse with an abscess a tetanus shot. Even if your horse has had a regular tetanus shot within the last year or so, your vet will likely recommend a booster to maximize your horse’s resistance to the potentially fatal Clostridium tetanii bacteria, which is widespread in the soil of just about every environment your horse is likely to be in. Secondary tetanus infection is a real risk when your horse has an opening in the foot, so best not to take any chances with this easily preventable problem.