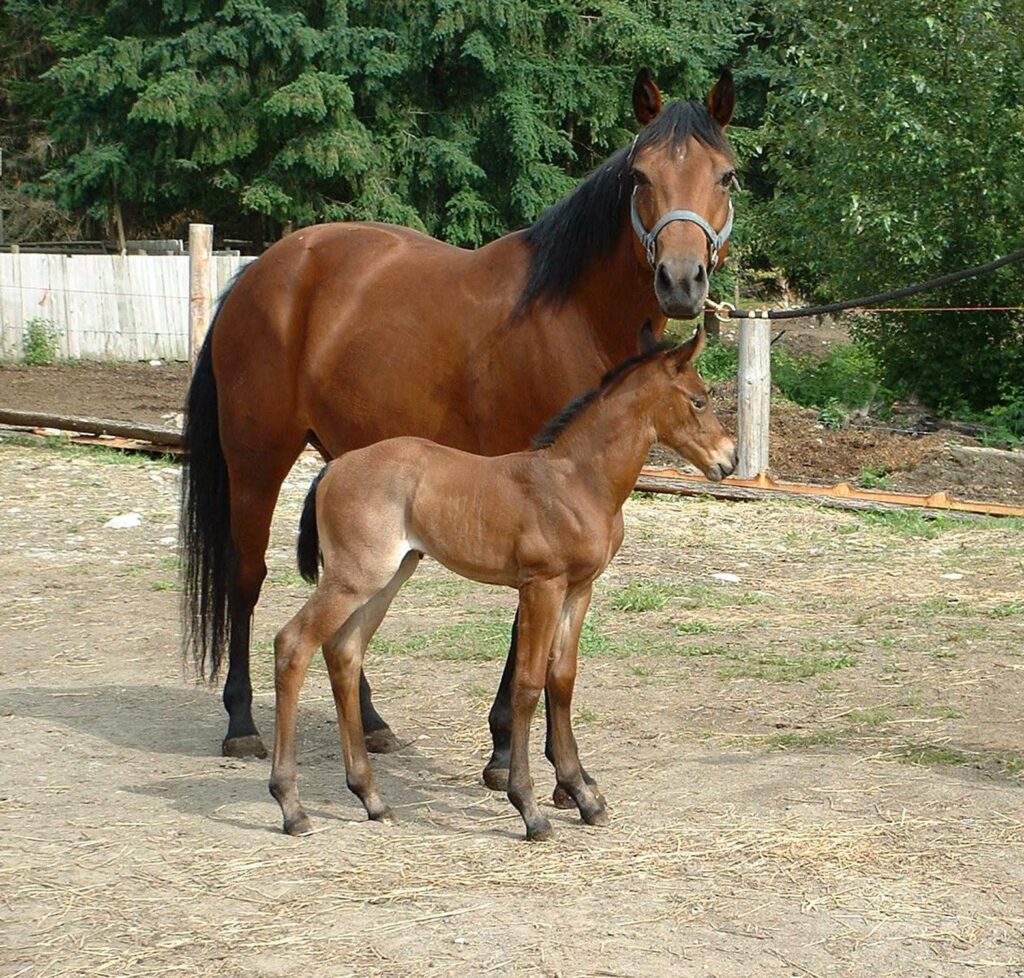 Queenie, with Tracker, once she recovered from the horrific accident that literally eviscerated her. Photo: Cheryl McIntosh.

When Cheryl McIntosh of Dewdney, BC, went to check her horses that morning, she knew something was wrong. She was normally greeted by a chorus of nickers from hungry horses, but that day, in the foaling season of 2003, the farm was ominously silent. The McIntosh’s 23 yr. old Tennessee Walker/QH cross, Queenie, had recently had a fine colt named Tracker. The mare had foaled out in a spacious field set up for mares and babies, and continued to live with the other pregnant mares until the McIntoshes noticed that Queenie was being picked on quite badly. Concerned for the safety of the mare and her foal, they moved the pair to a 20’ x 20’ pen made of 5’ metal horse panels.

On that morning, however, when Cheryl approached the larger enclosed area that contained the pen, she saw no horses. “I thought I must have put them in a different pen,” she recalls, “because the gate was closed and everything looked normal.” Then she saw Tracker near a building outside the panel pen — without his Mom. Cheryl knew that Queenie would never leave her baby, so she ran to phone her husband Gene at the house and told him to come down right away.

She then went back to Tracker and found Queenie standing just around the corner of the building. Says Cheryl, “I first noticed that she had a bleeding cut on her leg right below the knee, but then I saw her stomach and realized how much trouble she was in.” What Cheryl saw was a large, gaping abdominal wound, just in front of and below the flank. As she remembers, “We have lots of horses, and we’ve seen a few injuries in our time, but this was beyond anything I could have imagined.”

Once again, she ran to the phone, this time to call her vet, Hermen Geertsema, DVM, of Aldergrove, BC. “I said I had a mare in big trouble and I needed him to get to our ranch right away. I didn’t say much else because at that point because I didn’t really know what had happened.” Cheryl returned to the mare, who seemed to be taking a turn for the worse. “She was shaking, bleeding from her knee, and her whole stomach was ripped open with blood pouring out of it,” says Cheryl.

By that point Gene had joined her, so the two of them haltered the mare and draped a blanket over her back, then Cheryl phoned the vet back to fill him in. Cheryl explained that the mare appeared to be in tremendous pain, and she feared Queenie might go into shock. Dr. Geertsema suggested that the McIntoshes administer some Banamine, and assured them that he was on his way. As he recalls, “By Cheryl’s description, I certainly thought the situation sounded serious, but it’s fair to say that when I got there, I was shocked to see just how bad it was. The mare had a big, gaping hole in her side, with only the peritoneum holding the bowels in. You could see them churning around behind the membrane as if in a fish bowl, and my first thought was that this situation wasn’t going anywhere good.”

Though the mare had multiple injuries, Dr. Geertsema focused on the abdominal wound, which was clearly life-threatening. He initially tried to close the wound with the mare standing, but the sutures wouldn’t hold. Explains Geertsema, “There is so much pressure from the abdominal organs in that area – the cut was down on her side and the organs were pushing outwards, so the sutures just ripped through. It was also difficult to get the right angle to do the work, but it was mostly just a physics problem.” At that point, it became obvious that they would need to administer a general anesthetic and get the mare lying down if they were going to have any chance of closing the wound – but even that proved difficult. Says Geertsema, “I ended up having to give her a much higher dose of anesthetic than I would normally, as she had so much adrenaline in her system that she wasn’t responding.”

Finally, the mare did start to go down, but as she did, a bad situation suddenly became exponentially worse: the mare eviscerated, spilling a significant portion of her large colon out onto the gravel driveway. “We were horrified,” recalls Cheryl, “and the mare was still struggling to get up!” Gene managed to get hold of the slippery mass of colon, but at that point, Dr. Geertsema thought the situation was a no-goer. “Even if we did somehow manage to close the wound,” he says, “I thought she would likely get peritonitis or die of shock, or getting up she would damage the bowels.

“Generally speaking, surgery like that is done under sterile conditions in a clinic, and even then if you open the abdomen, there is a fair risk of things going wrong. So, it’s just not something you do, out in the field like that with bowels that have hit the dirt. If you did, you would not expect a positive outcome. Therefore, my recommendation was euthanasia.”

Geertsema believes that Gene would have gone with that decision, but Cheryl was emphatically against it. “In my mind,” she says, “Euthanasia was out of the question. If I was going to lose her, it would be from trying everything we could, not from giving up.” Though Geertsema questioned the wisdom of this decision, he agreed to keep trying — but not before trying desperately to reach someone to come assist with the daunting task ahead of him. Remembers Geertsema, “I was trying to get some backup – someone to keep the mare anesthetized and hopefully someone else to scrub in and help replace the bowel and suture it. Unfortunately, I couldn’t find anyone, so we did what we could under the circumstances – we washed the bowels off with clean water, and as Cheryl says, we basically ‘stuffed them back in’.

The next stage, and the most difficult, was trying to stitch things back together. Says Geertsema, “I had hoped we would have better luck with suturing once we had the mare down, but after we got the bowel back in, there was still so much pressure that the sutures in the muscle layers and the skin kept tearing through. One colleague later described what I was attempting as ‘trying to suture snot to pancakes’, which made me feel a little better about it not working for me, after the fact.” At the time, however, Geertsema was frustrated, realizing that there was no way they were going to be able to manage with just sutures. He pondered the problem, then made an unusual request: “I asked Cheryl to get me some large buttons, the biggest she could find.”

What Geertsema planned to do with the buttons would function similarly to grommets in a tarp – something to distribute the pressure over a wider area. “My thought was to sew the buttons on a little way back from the incision, one on each side, then tighten the suture between, sort of like tying shoes.” Asked if this is a common procedure, he replies, “The procedure itself is something that is done, though it’s not common, and certainly not using buttons. Usually you would use a medical device called a stent for that. The buttons were a bit of an inspiration right then. I’ve used the top of a syringe case before, but this time, buttons it was.”

Supplying the buttons, however, was not that simple, for as Cheryl explains, “I don’t happen to have a bunch of large buttons laying around the house.” Her solution? “I ran around cutting them off the family’s clothes.” Fortunately, the buttons did the trick, holding the wound closed even at the critical moment when the mare stood back up. Finally, Geertsema put a large elastoplast bandage directly on the wound, then they wrapped Queenie’s entire girth with many yards of cloth made from sheets Cheryl had cut up.

The next challenge was to prevent the mare from lying down again, as doing so might prove too much for the button “stents” and reopen the wound. “We put her and Tracker into a stall and hooked her up on a highline,” recalls Cheryl, “and that is where she stayed for the next three months.” The mare was put on antibiotics to try to prevent what Geertsema thought was almost inevitable sepsis, and then, says Geertsema, “There was nothing left to do but pray.”

Miraculously, Queenie survived. Says Geertsema, “I looked in on her at four days, and then four days after that. I basically expected the mare to go septic and die, so I was absolutely amazed that she didn’t.” Geertsema attributes the mare’s survival to a number of factors. “We acted quickly, for one, flushing the bowel right away. The mare also tolerated being tied up for an extended period of time, so that was helpful.” Most importantly, however, was Cheryl’s determination not to give up. States Geertsema, “Without Cheryl insisting that we try something, we obviously wouldn’t have gone anywhere. Fortunately, I listened to her.”

Cheryl, however, says the credit goes in large part to Queenie herself, and to the strength of Motherhood. As she explains, “I am convinced that Queenie survived because she was a mother, and there is no way she was going to leave her baby. Of course, if she hadn’t made it, I would have raised Tracker and he would have been fine, but I kept telling her, ‘Don’t you leave him, Queenie. He needs you and you have to take care of him.’ I think she understood that. It was being a mom that made her fight to survive, and it gave her the patience she needed to put up with being confined and tied up all that time.”

Today, Queenie lives a life of luxury, a hernia at the wound site the only visible sign of her near-death experience. “We don’t really ride her much,” says Cheryl, “because it’s only the skin holding her guts in, and we don’t want to risk anything happening to her. Sometimes we’ll toodle around on her a little in the arena, just because she loves to work, but we don’t take her out on trails where something could poke her in the side.”

As for how the accident happened in the first place, the McIntoshes can only speculate. “We think that the foal must have rolled under the panels,” says Cheryl, “then the mare tried to jump over to get to him and caught herself on one of the upright pipes at the end of the gate.” Geertsema emphasizes that it is not uncommon for foals to roll under fence openings, so the take-home lesson is that it is best to have foaling stalls and foal/mare enclosures with solid sides, if at all possible.

Geertsema himself took something away from this case. As he reflects, “This experience has certainly made me willing to try a little harder in cases that might look grim, though that’s not to say that another horse wouldn’t die from peritonitis under the same circumstances. I must add that it was one of the most interesting cases I’ve ever had, though it was probably the least fun at the time!”